When the lovely Amy Bramble decided to arrange a 100 prize giveaway of fabulous yoga goodies for her students this summer, #teamyogaleggs were very excited. As class regulars 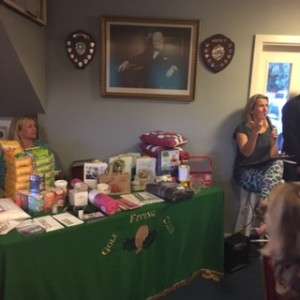 amassing a large stash of raffle tickets whilst attending Amy’s delightful friendly yoga classes was yet another perk to being part of such an enriching yoga community.

Since attending Amy’s very first class some three and half years earlier (and becoming ever so slightly addicted) we seem to have been quite involved and encouragingly supportive in each other’s yogic journey.

The gorgeous ladies of all ages, shapes and sizes who we share our breathing space with have eagerly awaited the arrival of yoga leggs (as I may have mentioned before we are not known for our speed) and we have been overwhelmed by heir support. (And their insistence that we get a move on) It is virtually impossible to attend a class, where there are no yoga leggs on disp 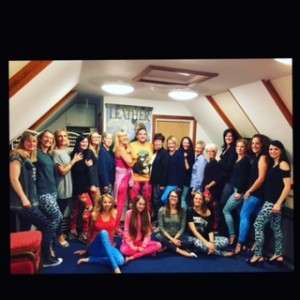 lay (so proud)! There was also a rather nice, rugby playing yogi (Nick you know who you are) keen to get in on the act too and after much joking around, was an excellent sport and donned a pair of XL rainbow yoga leggs in an attempt to help raise more funds for our local St. Claire’s Hospice. 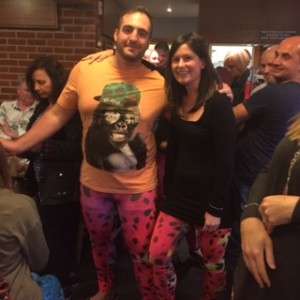 Amy kindly asked us if we would like to join in on her evening of yoga treats and celebrate the launch of yoga leggs with friends, family and our fellow yogis. We were very happy to. On the night the pimms were flowing, the weather held out (there had been some rather unyogic fretting about how many pairs of yoga leggs we could actually fit into the golf club) (we are all human) (itwas ever so slightly cosy) and the atmosphere was jovial, uplifting and generous (raising over three hundred pounds for the hospice). There were prizes galore; yoga leggs even got in on the act and offered the chance to win another pair of yoga leggs if you wore a pair of yoga leggs to the event, with some rather inspired combinations (Kat and her boots)(WOW) you can definitely glam up your yoga kit. There were twenty three of us dressed in Yoga leggs in total. And the winner was Nick (his wife was overjoyed) just shows how when you do an unselfish act of kindness you are often repaid by the universe in yoga clothing!

So its official we have launched! Thank you Amy Bramble,

#onthefirstdayofchristmas my #truelove sent to me… True #blue #camo #pocketleggings #yogaleggs 💙💙💙#fitness #yogapants #sports #leggings #gym #fashion #yogaleggs 💙💙💙
#imagine #thursdaythoughts thanks to @tinybuddhaofficial "Imagine the impact of being kind. Smiling more. Seeing the good first. Life is too short to be dragging others down. You get a choice every single day. Choose kindness. The world needs you." ~Rachel Marie Martin
We love seeing you head to toe in #yogaleggs @dpschoolofdancing @loveuyoga_kat_king special #kundalini #yoga class in #theydonbois #loveyoga #lovedancing #loveyou ❤️💕
Posted @withrepost • @annacoatesyoga I see you. It is A LOT right now. 🙃
Todays #cardreading @loveuyoga_kat_king #kundalini #magic #yogaclass what resonates with you? 🥰❤️💕
Posted @withrepost • @yogaleggs It’s beginning to look a lot like #christmas 😂 Our #redhot #leopard are the perfect #christmasstyle #christmasgifts ❤️ #yogaleggs #yogapants #womensfashion #winterwardrobe #exciting #leggingsaddict #limitededition 😍
Another wonderful #meditation class at our local #buddhistcentre and lovely to catch up with my guapa Emma ❤️ #trainingthemind #inhaleexhalerepeat #lettinggo #meditationclass #practiceandalliscoming #joy #peace #happiness 💕❤️
Connecting with who I am with my daily #sadhana #satnam #whoareyou #commentbelow ❤️💕 This always takes me to many circles and workshops with a dearly treasured and so loved teacher ❤️💕
Another fabulous morning @loveuyoga_kat_king #kundalini #yogapractice with my lovely partner in #yogapants Mandy, doing the most important work, the work on ourselves for the benefit and service of everyone else ❤️💕 I wonder how different the world would be if we all worked on ourselves ❤️💕 #happyhumpday🐫 ❤️💕
Posted @withrepost • @donmiguelruiz What is stopping you from enjoying your life?✨
#angelfeathers #everywhere #surroundedbyangels #feathers #love #connection ❤️💕
Sounds perfect to us #yogaleggs #dogcuddles @loveuyoga_kat_king ❤️💕
Follow Us: